Filing Starts With A Flurry 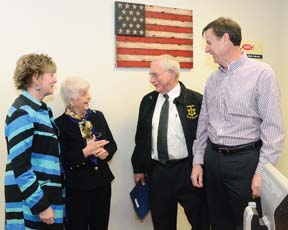 John Ferguson was at the Davie County Board of Elections office well before the noon start of filing for state and local offices on Monday. He was followed by Sonya Spry.

Both Republicans, they are filing for the Republican nomination for county commissioner and clerk of court, respectively.

Ferguson, 75, the first elected mayor of Bermuda Run who served in that post for 12 years, said one of his goals will be to improve infrastructure and the business climate in Davie County.

“The county needs more business and the way to get business is more infrastructure,” he said. Support of the water and sewer systems and the economic development commission are vital, he said.

Barrett, 54, of Advance, served as county commissioner from 2000-2004, when commissioners began the process of getting a new medical facility for the county, made improvements to the Cooleemee sewer plant and hired Terry Bralley as county manager.

“We’ve been blessed to live and raise a family in Davie,” Barrett said. “I’d like to be a part of the future of Davie County as a county commissioner … talk to folks and see what they have to say about the issues and challenges.”

Spry, 42, of the Sheffield community, is a 16-year veteran of the clerk of court’s office who said she learned the business from former clerk Ken Boger.

“I know the duties,” she said. “I helped train the current clerk in certain duties.” She said being the clerk of court has always been in the back of her mind. She was let go from her job earlier this year after announcing her intentions.

Drechsler, 55, of Mocksville, a former magistrate, is seeking her second term as the clerk of court.

“I want to build on the experience I’ve had since working in the clerk’s office since 1990.” There have been a lot of changes in the office in the past several years, including the loss of positions. She is proud that service to the public has not suffered. “Everybody is asked to do more with less. I have a staff of hard workers willing to take up the slack.”

Stokes, 67, of Mocksville, a retired N.C. Highway Patrol officer, is seeking his third term as sheriff.

His proud of the department’s accomplishments during his tenure, which he listed as: improved equipment and technology, more training, more K9 units, a DARE program that is second to none and a narcotics unit he says is making a difference.

“I’m very proud of our effort against illegal drugs and that will continue to be a priority,” he said. “I’m proud of our people. I work with the finest cops I’ve ever been around.”