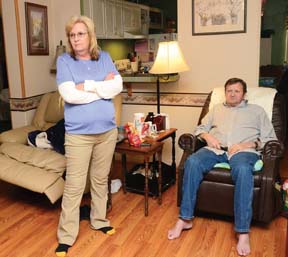 Kay Hollar walked through her home last week, pointing out bullet holes and a broken window, remnants of the chaos that took place when a teenager barricaded himself inside and opened fire on law enforcement officers.

She still can’t believe what Nicholas Tilley, a relative, did Jan. 22.

“Nick was just here Monday talking about getting his life straightened out and what he wanted to do with his life. I love Nick to death, but he done wrong,” Hollar said, standing in the bedroom where Tilley shot a K-9 officer to death. Around the corner, a blanket flapped in a cold wind in the broken-out window the K-9’s handler, Chris Fleming, dove through to escape Tilley’s gunshots.

Instead of escaping to safety, Fleming was shot by Sheriff Andy Stokes, who mistook Fleming for Tilley.

Fleming was also hit in the face by birdshot from Tilley’s shotgun. He was treated for the pellet wounds and a bullet wound to the arm and released from the hospital Friday. The bullet remains lodged in the tissue in the side of his upper back, according to Chief Deputy J.D. Hartman. Hartman said the doctors told Fleming it would cause more damage to try to remove it than to leave it.

Nicholas Scott Tilley, 19, was at his home on Cornatzer Road when Sgt. Shawn Ruff attempted to serve a warrant around 3:30 p.m. last Wednesday. Sgt. Scot Kimel said Ruff knew Tilley and didn’t expect any trouble, so when Tilley told Ruff to wait a minute while he got his coat, Ruff did. A few minutes later, Ruff heard the noise of a vehicle and saw an orange Camaro speeding away.

Using emergency pings from Tilley’s cell phone, officers eventually determined he was at a mobile home off South Angell Road.

Kimel said somewhere in between Cornatzer and South Angell roads, Tilley used his cell phone to tell his probation officer, Chris Ellis, that he was not going to prison. Ellis told officers Tilley was armed.

Hartman tried to negotiate with Tilley, who had taken one person with him when he fled his home and was holding that person, plus another one, hostage.

Kay Hollar said she and her husband Ray had been in Huntersville for a doctor’s appointment, and their son, Bobby, 15, was at home. Tilley called Ray from the Hollar’s home, telling him deputies “were after him,” and Ray told him they would be home in about an hour and a half and would talk about it when they got home.

But they never got the chance to have that conversation.

While at a restaurant, the Hollars got a call from their son Jason, a reserve officer with the Cooleemee Police Department, that Tilley had hostages in their home and deputies were outside.

Hartman said Jason attempted to persuade Tilley to let the hostages go, but Tilley refused. After phone calls back and forth between the Hollars, Tilley, Ellis and law enforcement officers, and after Tilley quit answering his phone, he said he would release the hostages in return for cigarettes. The hostages came out with their hands up, and Jason told Tilley he would throw the cigarettes to him, Hartman said.

“At this point, Tilley was in the hallway and moved closer to the door to get the cigarettes,” Hartman said, “and we were basically at the bottom of the steps, about five feet away from him. He did not have a weapon. The canine (Gorky) was released to get Tilley, and Tilley started reversing. He managed to get to the weapon before we could get to him. Gorky was down.”

Hartman said officers quickly began backing out of the home, but Fleming ran into a bedroom and dove through the window.

Stokes, who was standing on the front porch, just a few feet from the window, mistook Fleming for Tilley and fired on him.

In all, Hartman said, there were six shots fired, from Tilley’s 12 gauge shotgun and from the sheriff’s 9 mm handgun. The incident took between 10 and 15 seconds. Several loaded weapons were found in Tilley’s possession.

Birdshot was found in Gorky, who died from his injuries around 1 a.m. He was a 5-year-old Russian Shepherd who had served for four years. Hartman said he did his job, saving officers’ lives.

Around 8 p.m., Tilley surrendered, coming out a side door of the home with his hands up, Hartman said. He was taken into custody without further incident and was placed under a $1.8 million bond. Part of that bond resulted from previous charges related to the home invasion for which the warrant was being served.

Tilley was charged with attempted first degree murder on a law enforcement officer and killing a law enforcement animal. He is scheduled to appear in court Thursday on those charges, as well as the felonies assault with a deadly weapon inflicting serious injury, robbery with a dangerous weapon, first degree burglary, and kidnapping, stemming from the home invasion Jan. 1.

He has an extensive criminal history, including possession of marijuana, possession of drug paraphernalia, larceny, probation violation, breaking and/or entering, and attempted robbery with a dangerous weapon. Hartman said Tilley had also been in the court system as a juvenile.

Tilley is alleged to have stolen Oxycontin during the Jan. 1 incident, and Hollar said he also stole 75 tablets of the same prescription painkiller the day he took her son hostage. The medicine was prescribed to Ray, and she said Bobby told her Tilley and the other hostage were in the kitchen using the drug prior to the deputies’ arrival.

She said she knows the person with Tilley as Blake but did not know his last name. She said Tilley stole some of her husband’s prescription medication, put it in a needle and then into his veins.

She is proud of the way her youngest son has handled being held hostage, made to lie on the floor and not move for hours, but she said she is ready for their lives to get back to normal and is not happy with the way the whole thing was handled.

“Andy (Stokes) should have been directing instead of trying to be he-man. If this thing was handled differently, it wouldn’t have ended the way it did. It was handled wrong,” she said.

Stokes held a news conference the day after the incident, explaining why he thought it was Tilley coming through the window and why he shot.

Donations are being accepted at a local restaurant for bullet proof vests for the remaining Davie K-9 officers. Gorky was not wearing a vest when he was shot.

Hollar said her son Bobby is grateful that his older brother came to the scene. Although Bobby said he never felt afraid of Tilley, his brother Jason made the situation better. “He is so glad Jason was there,” Hollar said. “Bobby felt like Jason had it under control until the K-9 came in.”