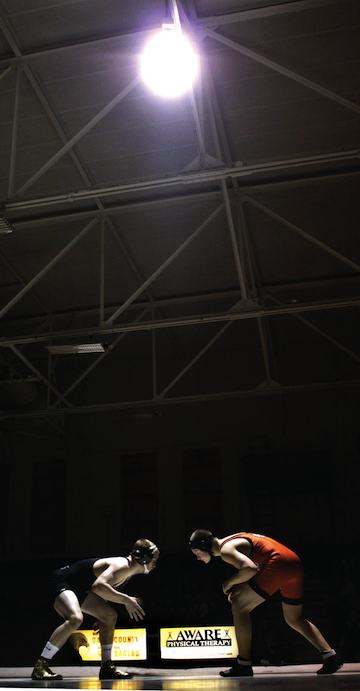 When Howard returned to the mat, he found a tough opponent on the opposite side. The West senior was 21-2, was ranked third in 4-A at 170 and had not been pinned all year.

It didn’t take long for Howard to regain his mojo. To be exact, it took 90 seconds. He made the Titan look ordinary by pinning him in the first period.

“I’d been preparing in practice all week,” said the senior, who improved to 8-1. “Coach (Buddy) Lowery said before the match: ‘If you don’t want to wrestle, just tell me.’ I said: ‘I came back for a reason. There’s no point in me not wrestling.’ Initially I thought I wouldn’t be back. But it’s my senior year and I missed being out there with my team, so I struggled through the pain and came back. (The knee) kinda hurt, but it was nothing I can’t wrestle through.”

Lowery was impressed, and he’s not the easiest man to impress.

“He’s just an athlete,” he said of Howard. “I guess you’d say different people’s bodies react differently. I mean you’ve got some people who can be out for a while and come back and wrestle well. Howard could win (the state). He’s got some meanness in him, and he’s got great hips.”

West coach Mike Bryant, who like Lowery doesn’t lack candor, wasn’t looking forward to the trip to Mocksville after the Titans suffered a series of injuries that coincided with a bad showing in a tournament in Charlotte.

“A big snow storm on Wednesday would be pretty nice,” he told The Clemmons Courier. “Short of that, I don’t like our chances. We’re missing four starters. Davie’s a tough team, and you can’t expect success against them unless you’re wrestling at full strength.”

West wasn’t going to get any pity from the War Eagles, who were without Bailey Ingram (22-9) and Preston Beauchamp (15-5). They were replaced in the lineup by freshmen Will Allen, who was making his varsity debut, and Tristan Merritt, who was appearing in a varsity match for just the third time.

The match began at 195, and Davie was awesome out of the blocks. Jack Robertson survived 1-0 at 195 despite being under the weather. He mustered enough energy to protect his undefeated record.

“Robertson was sick and that guy’s pretty good,” Lowery said.

Davie captured seven of the first eight weight classes, the exception being a forfeit at heavyweight. Lowery wasn’t about to put Kyle Cookson, who weighs 210, out there against a West heavyweight who checked in at 276.

Correll, Hunter Smith and Isaiah Whitley pounded out pins as Davie surged ahead 21-6. “When Smith gets to be a true 108-pounder, he’s going to be pretty good,” Lowery said.

Jake Barneycastle, Lake Billings and Javon Adkins reeled off consecutive decisions as the margin mushroomed to 31-6.

The Titans had a major rally in them. Three straight pins chopped Davie’s lead to 31-24. “I said: ‘Dang, if we quit getting pinned, we wouldn’t have to sweat this hard,’” Lowery said.

Davie was getting a little uncomfortable when Josh Lankford fell behind by four at 160. But a spectacular five-point move reversed the momentum and Lankford held on 6-4.

When Lankford finished up, Davie could smell blood in the water. Howard got a win to savor, and that settled the issue at 40-24. West forfeited to undefeated Alex Gobble at 182.

While West fell to 8-5 overall and 1-2 in the Central Piedmont Conference, the War Eagles moved to 3-0 in the CPC, extending their league winning streak to 34. Davie is 30-3 all-time against West.

“It was a good match,” Lowery said. “They were missing some, we were missing some. We won some good matches. It was good for us. It’ll help us down the road. We wrestled five freshmen and two of them won (Barneycastle and Smith).”

Davie’s shorthanded lineup took its toll in the Eagle Duals at Wilkes Central on Saturday.

When Davie and St. Stephens met in the fifth match of the year, the War Eagles were healthy and they pulled out a 35-34 barnburner. The rematch, however, was another story as Davie was still missing Ingram and Beauchamp, both of whom should return sometime next week.

• Correll has a 23-match winning streak.

• Four War Eagles are ranked in the top 10 in their weight classes. Robertson is ranked second at 195, Gobble third at 182, Billings sixth at 120 and Correll ninth at 220.

JV Girls Get Lift From Tabor