JV Girls Get Lift From Tabor 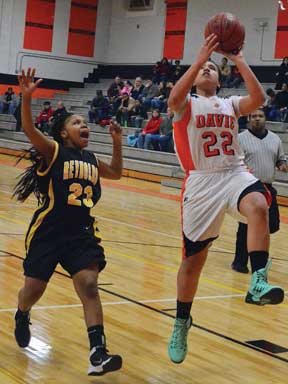 Through the first seven games, the Davie jayvee girls basketball team’s success was mostly about Madison Bohannon, K’lea Parks, Jessie Beck and Patterson Jones (before she was moved to varsity). It was about the all-around play of that foursome and the rebounding of Bailey Walsh.

But when Davie needed someone else to step up against visiting Page, a little-known player delivered an out-of-nowhere rise.

Freshman Cameron Tabor scored nine points in the first seven games. She played sparingly in the first six games. She came off the bench against Page, and lo and behold, she wowed everybody with 13 points and eight rebounds.

“We’ve needed somebody who is going to play in the post,” coach Jenn O’Brien said. “We weren’t necessarily looking for somebody big, but somebody who was going to play big. She hadn’t played since elementary school, but she’s got a nice shot, she’s big and we definitely needed her size. And she’s very athletic.”

What made the coming-out party all the more impressive is Tabor did it on 6-of-8 shooting.

“This Page girl was pushing her around and Cameron was like, ‘Oh, no,’” O’Brien said. “I think that’s what triggered it. Once she made her first true post move, she had perfect position, she took one drop step, a power dribble and went right up (and scored). After that, it was like, ‘Oh, I can do this.’ When she got the ball on the post, she scored or went to the line.”

The War Eagles pulled out a terrific nonconference contest to improve to 6-2.

Davie was up 54-51 with three seconds left. Page set up an inbounds play, but it couldn’t get a potential tying shot off.

“Everybody went into deny defense,” she said. “They got it in, but they were way too far out to get a shot off.”

“Page was a good team,” she said. “It was the first time we played a team that ran a true offense. It was one of the most exciting games that I’ve been in. It really made the girls work because we’d be up and then we’d be down.”

The key factors were Bohannon (13 points, seven rebounds), Beck (11 points, eight rebounds) and Walsh (eight points) as Davie improved to 7-2, 2-1. Walsh scored a season high on 4-of-4 shooting. Although Parks was held to a season-low four points, she contributed four steals and three assists.