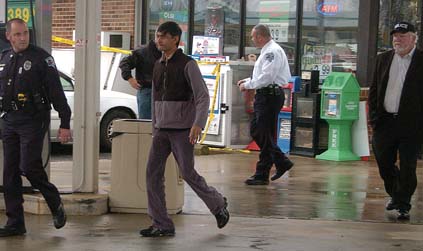 Buying illegal drugs is supposed to mean going into dangerous neighborhoods, dealing with dangerous individuals.
That’s not always the case.
In Mocksville last week, a mild-mannered store owner was arrested for selling illegal drugs. It was as easy as walking into his store and either picking it up off the shelf, or asking for the right product.
Mocksville Police charged Mukeshbhai Rashaubha “Mike” Goyani, 30, of Wilhaven Drive, with three counts each of selling and delivering a controlled substance, trafficking a controlled substance and maintaining a dwelling for the sale or delivery of a controlled substance, and with possession of drug paraphernalia. He was placed in the Davie Detention Center in lieu of a $500,000 bond, pending a Dec. 22 hearing in Davie District Court.
Mocksville Police Capt. Nelson Turrentine said that undercover officers bought the drugs from Goyani at MDS Express, a convenience store at Madison and Yadkinville roads.
Police officers, along with Davie sheriff’s officers, raided the business and Goyani’s home last week, finding $150,000 cash, more than 1,000 pieces of drug paraphernalia, and numerous bags of what is believed to be synthetic marijuana and methamphetamine.
Pornography was also seized. Police Chief Robert Cook said Goyani did not have a license to sell adult materials. It is not known whether the pornography would be legal if he had a license.
Cook said the investigation has been ongoing for months. Officers had been receiving complaints that drugs were being sold from the store. More recently, the complaint included alcohol sales to minors, Cook said.
The synthetic marijuana is usually some type of herb that has been soaked in the chemical, which …