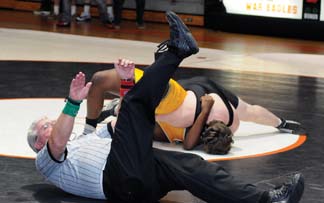 The Davie wrestling team pulled out a win in the 11th hour. Sound familiar?
The season is still young and coach Buddy Lowery’s War Eagles have already experienced a year’s worth of drama. They beat South Caldwell on criteria after the teams were tied at 42-42. They won 34-29 over Lake Norman on Parker Grant’s pin. And last week against visiting North Rowan, Toby Lowe capped a heart-pounding 36-34 win by pinning his 195 opponent in the final match.
Lowe’s heroics preserved Davie’s unbeaten record at 8-0.
“I told (Chris) Callison it was going to be close,” Lowery said. “He said: ‘It’s not going to come down to the last match, is it?’ I said: ‘I don’t know. It could.’ Sure enough, it did. But they’re pretty good.”
Earlier in the Southern Slam Invitational at Eastside High in Greenville, S.C., the War Eagles competed in a high-profile tournament without Lowe, Logan Cartner and Ryan Smith. Despite the injuries, Davie placed ninth out of 35 teams. There were teams from the Carolinas and Georgia.
The first-place team had 198.5 points. Davie had 119 …