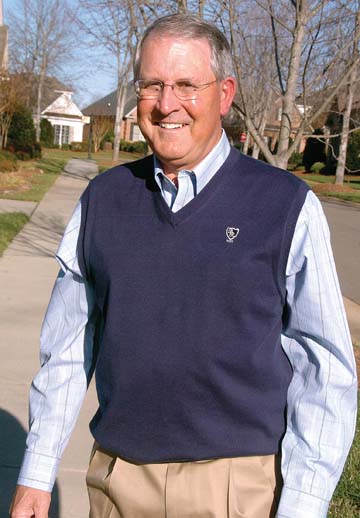 Political newcomer Ken Rethmeier didn’t really know what to expect when he decided to run for mayor of Bermuda Run against incumbent John Ferguson.
As a longtime health care administrator who moved to Bermuda Run in 1998 to join what he calls the old Wachovia — “the blue Wachovia” — the semi-retired Rethmeier sought another leadership challenge.
“I did what I would call my own due diligence,” Rethmeier, 66, said. “A number of people actually came to me and said, ‘We think you ought to run for mayor.’ I had previously served on the board at the Bermuda Run Country Club and was president of the board for two years. I think a lot of people that I came in contact with got to know a little bit about me and my leadership style and so forth.
“I was attending town council meetings and agenda meetings and meetings of the Bermuda Run long-range planning board. I learned as much as I could about the town and the history. And I looked at what I could offer going forward.”
Obviously, enough people in the town took note of Rethmeier, who pulled what many considered to be a surprise as he garnered 55 percent of the vote to win 298-241 over Ferguson. That ends Ferguson’s 10-year reign as mayor.
Rethmeier, who did graduate work at UCLA years ago, viewed his run at mayor in the same manner employed by John Wooden, the legendary basketball coach who led the Bruins to a 10 NCAA championships in 12 years.
“If you ever read any of his stuff, he never coached to win,” Rethmeier said. “What he did is he coached his players to play well. And then the outcome is whatever it is. So I went into this saying, ‘I’m going to do the best job I can working with the people that I know in the area and if we win, great, and if we don’t, that’s OK, but we’ve got to give it a good shot.’ That’s the way I took it. We were very pleased and feel fortunate that we did win.”
When Rethmeier started doing his research on the wants and needs of Bermuda Run, he knew that the Wake Forest Baptist Health medical facility coming to eastern Davie would be a building block.
“When I looked at the challenges that we have, one of those that is really a great opportunity is the construction and opening of the Davie County medical complex in 2013,” he said. “Having spent 35 years working in the health care industry, I know the impact …