High-Octane Boys Put On A Show In Season Opener 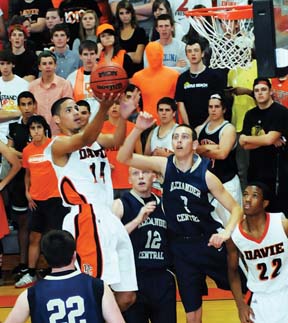 The Davie varsity boys basketball team is tall, athletic and versatile, which visiting Alexander Central found out quickly in last week’s season opener.
The charged-up War Eagles put on a show, and the tone was set very early. Davie scored the first 17 points, led 20-6 after one quarter and went on to win 73-53.
“There was an intensity to the start of that game that I don’t know that I’d ever been apart of,” Davie 10th-year coach Mike Absher said. “We were very, very focussed.”
Six War Eagles scored in the opening quarter, including Nate Jones with seven points, Caleb Martin with four, Peyton Sell with three, Cody Martin with three and Shannon Dillard with two.
“Our ball movement was great,” Absher said. “Our transition game was great. We were inside and out.”
The decisive win was a testament to Davie’s end-to-end, in-your-face defense.
“Defensively we were outstanding the whole first half,” he said. “Our press was very effective.”
When you see Jones, Dillard or the Martin twins coming down the lane, you better take a deep breath if you’re an opponent – because they’re coming hard. And they’re not the only dunkers. Caleb dunked off an offensive rebound, and on the way down he caught an elbow from a Cougar and suffered a gash near his eye. Bleeding, he needed three stitches and a new jersey. But he returned to the game.
There were six dunks in the first half, sending a big crowd into hysterics time after time. One time Jones elevated and dunked one-handed. The next time he soared above the rim he dunked with two hands. Caleb and Dillard had two jams each as Davie flew to a 42-21 halftime lead over the helpless Cougars.
Davie dropped in eight 3-pointers, including four by Jones. He had a stellar start to his senior year, scoring 24 points on 9-of-12 shooting. He added six rebounds.
Dillard’s senior year got off to a strong start with 20 points, 10 rebounds and four blocks. Caleb contributed 11 points and six rebounds. Cody had nine …