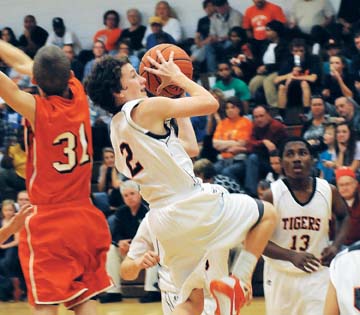 A painful final two minutes spoiled one of the top individual performances in South Davie boys basketball history last week at Ledford.
The Tigers let a 56-50 lead slip away in a 62-61 loss. The loss was no fault of point guard Nic Starnes. All he did was hit seven 3-pointers and score 35 points. He became the seventh player in South history to join the 30-point club.
“He got every 3 off an inbounds play,” coach Brent Wall said. “They haven’t guarded it yet.”
In the season opener earlier last week, the Tigers struggled mightily in a 54-35 defeat to visiting North Davidson. South trailed 20-4 in the first quarter, with Noah Stowe scoring all four. Starnes (11 points), Chris Reynolds (nine) and Stowe (seven) were South’s top scorers.
But after opening the season with a dud, the Tigers played valiantly at Ledford. It was a shootout from beginning to end. Caleb Wallace’s nine points on three 3s and Starnes’ eight points on two 3s staked South to a 17-11 lead. South led 29-25 at the half and trailed 44-42 after three. South outscored Ledford 19-18 in an entertaining fourth.
“We showed true grit,” Wall said. “I went seven deep and those seven left it all out there. I saw emotion. I saw …

By Brian Pitts Davie Enterprise Record One moment the Davie football team was on the verge of wrapping up a... read more