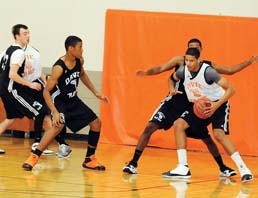 Last year the Davie varsity boys basketball team went 19-6 and tied for second in the rugged Central Piedmont 4-A Conference, posting the first winning season in six years, the most wins in 11 years and the third-most wins in the school’s 55 years. Davie ended an 0-16 streak against CPC nemesis Mt. Tabor and won a first-round playoff game at Smith.
With four starters back, it may very well be that you ain’t seen nothin’ yet. The War Eagles haven’t won a conference title since 1970. But this is the season coach Mike Absher and the War Eagles have been building for and waiting for.
“It is different,” Absher, Davie’s 10th-year coach, said. “The great thing is they don’t want to hide from it. They understand there’s obviously a high expectation. We approach it that you take it one day at a time. Let’s just get better today. We do talk about that there’s a place we want to be, but …