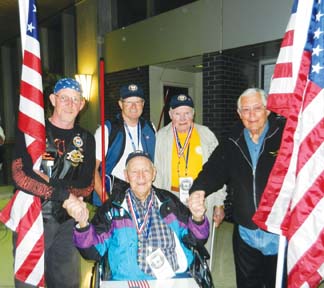 On Saturday, Oct. 15, Francis Borden and Richard Smith, both World War II veterans and residents of Davie County, attended the Triad Flight of Honor trip to Washington, D.C. to tour the Capitol City and to visits all of the war monuments.
The trip was the 11th flight conducted by the Triad Flight of Honor, and only one more trip from the Triad is scheduled, for Veteran’s Day. The October trip contained 90 World War II veterans (88 men and 2 women), plus 45 guardians (each assigned to care for two veterans), and approximately a dozen additional participants (medical doctor, EMTs, team leaders).
It was a full day of activities: 7 a.m. arrival at Greensboro Airport, 8:30 departure to Reagan Airport in Washington, 9:30 arrival at Reagan Airport, bus tour of the Capitol City, and stops at the World War II monument, The Navy Yard and Museum, the Korean and Vietnam memorials, the Iwo Jima Memorial, and the Air Force Memorial.
One of the organizations that supports and funds the Triad Flight of Honor is the Rotary District 7690, along with the Rotary Clubs in the Central North Carolina district …