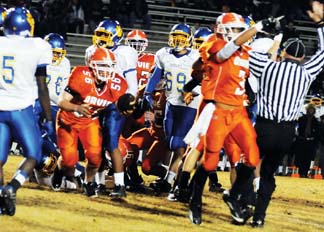 One moment the Davie football team was on the verge of wrapping up a 25-22 victory in the first-round of the 4A playoffs here Friday. Moments later, the War Eagles were stuck with a deflating 29-25 defeat.
The odds of the decisive play working in Dudley’s favor were somewhere between unlikely and impossible – a 34-yard pass on fourth-and-20 with six seconds remaining – but quarterback Richard Hayes managed to connect with Brandon Reynolds, who caught the ball around the 3 and made one tackle-avoiding move. A hit sent Reynolds into a helicopter spin, but he landed in the end zone.
After the ensuing kickoff drained the rest of the clock, you could see the dismay, chagrin and disconsolateness of a team that came so close to moving on.
Davie finished 8-4 one year after reaching the 4A championship game. It had won eight of nine games. Dudley (6-5) has won six of seven since an 0-4 start.
“I don’t know how you can,” Davie coach Doug Illing replied when asked how to explain the unbearable pain. “I’m not prepared for that. The best team didn’t win tonight, and that’s the disappointing part. You feel sorry for our kids.
“You throw up a Hail Mary. You’ve got a kid (Reynolds) that’s hungry for it, and he goes and gets it. It looks like he got lost in the scramble, and it looks like …