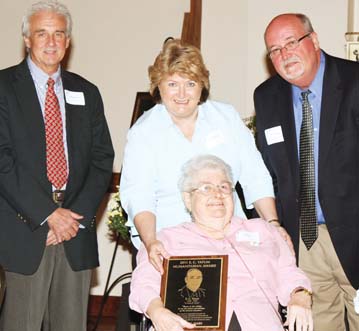 Lillie Mabe’s biscuits are famous.
If you haven’t tasted one, either you’re a newcomer or you haven’t been offered one. Because if Lillie Mabe offers you a biscuit, you take it. And you’ll give a dollar or two for it, knowing that the money will go to a good cause.
Last month, Mabe was honored by the Davie County Chamber of Commerce with the E.C. Tatum Humanitarian Award at its annual banquet. Davie Farm Service was named the small business of the year, and Avgol was named large business of the year.
But back to those biscuits.
When folks started raising money to build the Davie Family YMCA, Mabe was working at Hanes in Winston-Salem. The YMCA became her cause. It was a place for young people, the ones Mabe calls her “kids,” to go and have fun and grow into responsible adults. She would make biscuits, take them to work and sell them, and donate the money for the establishment of the YMCA.
Years later, while working at Walmart, Mabe still had the passion for kids at the YMCA – and you guessed it – she sold more biscuits so that even those who couldn’t afford to join the Y could benefit from the services. She raised money for veterans, scholarships and other causes.
That’s not all she did. Mabe would host young people at her house, teaching them to make those biscuits. She collected sewing machines and gave them to those who could use them. And she hosted even more young people in her home, teaching them how to sew.
“She’s one of Mocksville’s finest residents, a champion of good causes like the Davie Family YMCA, Crosby Scholars and anything that benefits people – especially children,” said Terry Bralley, president of the Davie Economic Development Commission and former manager …