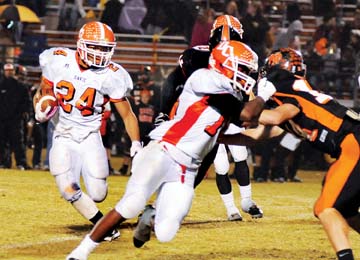 WELCOME – One play doesn’t decide a game, but some plays mean significantly more than others. One incredible play broke North Davidson’s spirit in the Davie football team’s 31-16 road win last Friday.
North, which trailed 14-0 after Davie’s first two offensive series, was back in the game when Charles Brunson’s 5-yard touchdown reception made it 14-10 with 19 seconds left in the first half.
But North’s new lift was short-lived. Davie had the ball at its 35. Adam Smith threw incomplete on first down. On second down, Smith, who added luster to his player-of-the-year credentials with two TD runs and two TD passes, unloaded a moon ball on the last play of the half. Nate Jones was 10 yards behind the secondary when he caught it, and he dashed down the left sideline for a 65-yard TD. The visitors’ side erupted in delight as Davie took a 21-10 lead into the break.
“We stole one there,” Davie coach Doug Illing said. “We thought they would be in a prevent. Coach (Todd Bumgarner) noticed they weren’t in prevent. We called the wheel route, Nate was wide open and Adam hit him dead in stride.”
“With Adam and Nate, just about anything is possible with those two on the field at the same time,” center Heath Nail said.
The War Eagles thumped a jacked-up opponent with a share of the regular-season championship on the line. While North finished 8-3 overall and 3-2 in the Central Piedmont Conference, Davie improved to 8-3, 4-1 and tied Mt. Tabor for first. Tabor took care of business against Reagan, winning 45-21.
This gave Illing an eighth CPC title in 14 years, but his first since ‘07. It was special because Davie won eight of nine games after an 0-2 start and because Illing was coaching with a heavy heart. His father, James Illing, passed away earlier in the week.
“We challenged the seniors at the beginning of the year to do something that hasn’t been done in a long time and go out with a boom,” Illing said. “I didn’t shave this week because (James) was rough in the ICU room. So I said I’m going to go rough and coach tonight in honor of him. He would have been very proud and excited tonight. I know he was here looking upon it, and I know he’s up there smiling right now …