Man Arrested For Fraud: He Is Accused Of Taking Money, Not Finishing Jobs 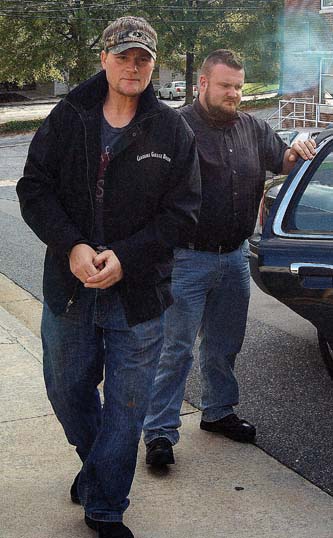 A local man charged in Davie and Rowan counties remains in jail with a bond of $256,000.
John David Hodges, 40, of Gladstone Road, Mocksville was arrested Oct. 7. He is charged with three counts of obtaining money by false pretense in Davie.
According to Davie County Sheriff’s Office Detective Sgt. B.T. Emory, Hodges has been hired by numerous people for plumbing and carpentry work in the last several years.
“He will get a majority, or all, of the pay and do a little, if any, of the work,” Emory said.
The three cases in Davie total approximately $12,000 that was paid to Hodges, according to Emory.
Emory said that seven cases in Rowan total more than $100,000 that was paid up front to Hodges.
Emory said that Hodges has had numerous civil cases against him in the past. “Some of those cases date back to the 90s.”
Hodges is not a licensed plumber, according to Emory, and holds no licenses in any other home improvement areas.
“A lot of his victims are elderly people,” Emory said. “We are asking anyone else who has been a victim of Mr. Hodges to come …