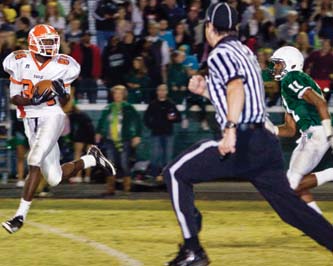 CLEMMONS – Ready for one of those you-can’t-make-this-stuff-up tales?
Friday’s showdown between Davie and host West Forsyth was tied at 17 with less than eight minutes remaining. Davie star quarterback Adam Smith collapsed to the ground on a 3-yard run. He had a leg cramp. Davie’s crowd had a heart-in-throat cramp. Without Smith, Davie was the equivalent of a computer without a mouse, or so it seemed.
Nate Jones didn’t get the memo. He’s one of those athletes who has talent you can’t teach. He’s brash. He doesn’t know when he’s supposed to be nervous. He predicted he would be a dominant receiver before his first football game in three years.
After Smith finally got to his feet and walked off the field, Jones took over at quarterback and directed the wildcat formation. For years to come, fan will surely talk about what he did to help Davie pull out a harrowing 23-17 victory.
On second-and-7 from the Davie 36, Jones faked to the in-motion running back, Devon Parks, and sliced and diced 8 yards. On the next play, Jones faked to Parks and looked downfield. He threw a 40-yard laser that hit No. 84 Jae-Re Peebles between the 8 and 4 at the West 28. Peebles sprinted to the house for a 56-yard touchdown.
In the postgame, with teammates screaming and coaches hugging, Jones could not have been more laid back.
“I was confident in my receivers,” Jones said. “Me and Jae-Re have been working on it in practice and it just connected. I just went with the flow and felt comfortable. The line blocked pretty good. They went with the run, I saw Jae-Re like I had in practice and I slung it. As soon as I released it, I saw Jae-Re, I saw where the ball was going and I was like: ‘Yeah, that’s money.’”
This reminded us that one of the beauties of following sports is the chance to see something you have never seen before, even if you’ve witnessed thousands of games. You saw a freakish athlete making a spectacular play look routine …