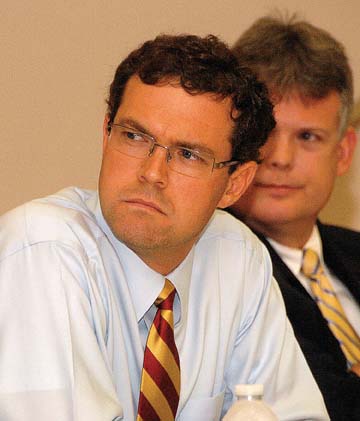 If the school board had hoped to elicit a promise from county commissioners at their meeting last week, they left empty handed.
Terry Renegar, school board chair, tried several times to get commissioners to guarantee, or at least say, they would uphold whatever conclusion might be reached by a third party in terms of school facility needs. But county commissioners, for the most part, remained silent on that point.
The only morsel offered was from Mark Jones, chair, who said, “If you bring forward a plan you are confident in and are confident that is for the best of the students … I would pledge to you that we would bring this to a bond and let the people have a voice in the building of this school.”
The meeting was planned to have the two boards discuss facilities needs, but the entire meeting was dedicated to only one facility, the high school.
Dr. Darrin Hartness, superintendent, presented a history of the county’s schools from 1954, when four high schools were consolidated into one, to the present.
In the decades since, arguments over the need for another school, if there should be one big or two smaller high schools, where another school might be located, how old Davie High is, how many students it can house, and how facilities projects will be funded have been heated and public.
Over the past 51 years, eight school bonds have been presented. Five passed, the last one in 2003, to renovate four elementary schools, two middle schools and the high school. That was the same year one of three failed.
Recommendations in 2002 from a task force charged with examining needs and determining …