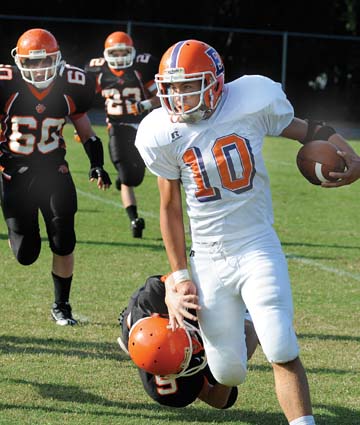 The Ellis football team has won 12 of 13 games dating to 2009, but last week’s 28-0 wipeout at South Davie was more than just a routine W.
It was Ellis’ first win over South after losing the first four meetings. It was also Ellis’ first shutout in 10 games. The 4-0 Jaguars have crushed opponents by a combined 115-20.
The Jaguars did something that hadn’t been done since 2001, handing South (2-2) its first shutout loss since a 6-0 home setback to North Rowan in an eighth-grade game in ‘01.
Ellis’ Cade Carney, an indestructible force at tailback and safety, was shedding tacklers and trucking over people on the way to 203 yards and four touchdowns on 14 carries. When Carney didn’t get the handoff, Ellis rushed nine times for 10 yards. Carney caught Josh Byrd’s lone pass attempt for 9 yards.
While Carney did it all on offense, he had plenty of help on defense. Derrick Mitchell was a beast. James Boyle, Zach Orgnon, Jacob Keaton and Brandon Lankford all had their moments for a swarming defense …