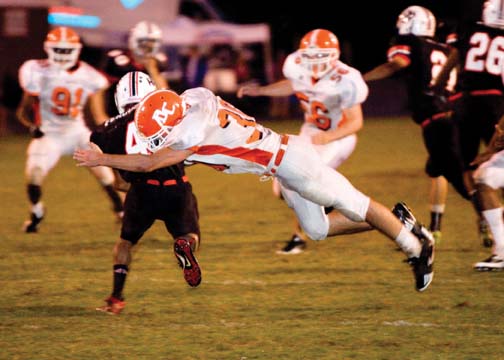 In the aftermath of last week’s 56-12 belting of Hibriten, it didn’t take long for coach Doug Illing and his Davie football team to start looking ahead to Sept. 30. This is the start of the season that really matters – the Central Piedmont Conference.  Davie’s Homecoming opponent will be Reynolds, with kickoff at 7:30 p.m.
The War Eagles conquered Alexander Central, Lexington, Thomasville and Hibriten to overcome the doubters and push their record to 4-2. But there’s no such thing as a lock in the CPC, more so this year than in the recent past. Reynolds (4-2) has the look of a team on track.
“This is what we’ve been working toward, and you want to be playing your best football at this time,” Illing said. “I feel good about where we’re at. We’ve still got a lot of things to get better at, but I feel like our team is well prepared for our conference. We’ve just got to keep getting better each day and take it as any other week.”
Last year the War Eagles ambushed Reynolds 34-0 as Stephon Smoot rumbled for 123 yards on 22 carries. But Reynolds’ Wing-T option offense could pose problems. The Wing-T uses deception, and Davie’s defense will have to play with discipline.
“Sweep, belly and trap,” Illing said when asked about the personality of Reynolds’ offense. “They throw it a little bit.”
Hibriten fullback Zac Walker was the only source of success against Davie as he ran for 126 yards on 18 carries. Reynolds has a hot fullback named Damien Booe, and the defense’s performance level against Booe could tell the tale.
“We got a little sloppy up front,” Illing said of the Hibriten game. “We were trying to stand tall and got pushed back – and ended up getting pushed back into our linebackers. Actually our linebackers couldn’t get to the fullback. It was good execution on their part, but it was a little lackadaisical on our part up front. It will be a good learning experience in film session …