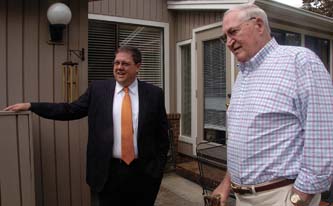 The new dog called on the old dog last week. In “Lion King” terms, Simba went to see Mufasa.
Hang the metaphors, new Davie County Schools superintendent Darrin Hartness visited the system’s godfather, James E. Everidge, last week.
“I have a lot to live up to,” Hartness said, predicting great days are ahead for Davie County’s school system.
Everidge, 80, served as superintendent for 17 years, 1964-81, the longest tenure of anyone at the school’s helm.
His handiwork is still evident.
All the elementary schools were expanded and improved. Pinebrook Elementary was built as the old Farmington and Smith Grove schools were consolidated. A new Mocksville Elementary was built. Two junior highs were built. And Davie County became a laboratory for teaching techniques, attracting visitors to see the transformation.
“We built a lot of schools,” Everidge recalled. “We developed a pretty good school system here.”
He inherited a system with dilapidated elementary schools, almost all of them. “They weren’t worth saving. They had outlived their usefulness, maybe by 50 years.”
To top it off, Everidge guided the Davie County Schools through racial integration with few difficulties, unlike the troubles experienced in many other places …