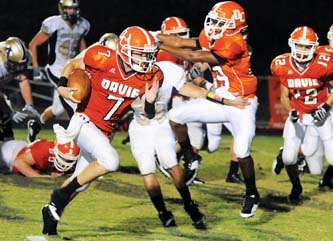 Davie’s football team made things hard on itself in the first half, fumbling the ball away twice and committing two costly penalties to erase plays that would have put Davie in the red zone.
But everything clicked in the second half and Davie won going away over Alexander Central, 24-10, Friday at War Eagle Stadium.
The War Eagles (1-2) got a measure of redemption for painful losses to AC the past two years. The Cougars, who won 20 games in 2009-10, fell to 1-2.
“After an emotional loss (at West Rowan), we put them through a tough test in practice, and boy, they came out and performed,” coach Doug Illing said.
Stephon Smoot broke his longest run of the season (29 yards) on the game’s first play from scrimmage, but he coughed up the ball twice in the first half, muting a 115-yard opening half. Smoot made amends, protecting the ball the rest of the way and finishing with a career-high 181 yards.
Displaying power and speed, Smoot recorded his sixth career 100-yard game – but his first of ‘11.
“I was disappointed at the (fumbles) in the first half,” Illing said. “They were tugging at it all night, and he’s a better running back than that. I think we blow them out in the first half if he just hangs on to it. But he’s not going to hang his head. He got back to his old self …