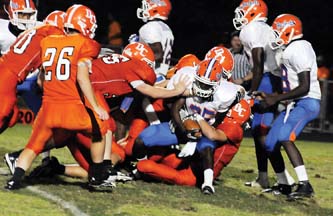 If you were worried that Davie’s offense would have to score 40 points a game to have a chance, Friday’s 28-20 win over visiting Lexington debunked that theory a bit.
When the War Eagles gave up 41 and 45 points to Page and West Rowan, they didn’t look as if they could win with defense. But the ‘D’ is rapidly progressing.
The Yellow Jackets have a ton of athleticism and speed, but two of their three touchdowns came on short drives (19 and 17 yards). Only five runs went for 10 or more yards, none more than 20. Their biggest pass play was 19 yards.
Davie is 2-2 after an 0-2 start. Lexington, which came in flying high after destroying Robinson (48-10) and North Stanly (47-17), fell to 2-1.
“Our defense did a good job of swarm tackling and just hanging on,” Davie coach Doug Illing said. “Hats off to them. These guys are learning how to play defensive football.”
Lexington’s Quandarius Crump, who has been offered by N.C. State, and Marquez Grayson were monsters in the first two weeks, with Crump averaging 19.5 yards on eight carries and Grayson averaging 8 yards per carry. Davie kept both in check. In fact, Crump was virtually invisible with 26 rushing yards.
“We kept them from going outside,” linebacker Alex Gobble said. “We kept them inside where everybody was at.”
“We just swarmed to the ball,” linebacker Jason Lewis said. “We played together as a team. We contained them pretty good.”
“They were trying to get around us, and coach told us all week that we’ve seen that speed week after week and that we’re used to it now,” safety Caleb Mathis said. “I thought No. 5 (Crump) was going to have more catches, but he couldn’t get into it. I think he was hearing footsteps. We’re tackling better and we’re learning to do our jobs.”
Crump may have sensed Gobble’s footsteps as a pass over the middle fell incomplete on the …