A Nation In Prayer – Revival After 9/11 Changed America Forever 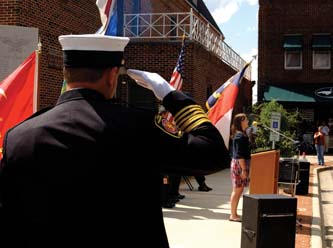 On Sept. 11, 2001, terrorists tried to destroy the American’s way of life.
The terrorists’ aim, Davie Sheriff Andy Stokes told several hundred gathered on the court square Sunday afternoon to commemorate the occasion, was “to put terror and fear in our hearts and minds.”
It didn’t work. Stunned temporarily, America quickly recovered.
It was evident with the people who gave their own lives trying to save others. It was evident as people began to pray. Flags showed up just about everywhere. People put aside politics and race to come together.
The most enduring images were those of rescuers, Stokes said.
“They were running into the destruction as others were running away. To the rescuers, it was business as usual. Every day in Davie County, emergency responders prove their commitment to their fellow human beings … sometimes they prove it with their own lives.”
Those rescuers, Stokes said, raised the bar for all to follow.
The afternoon featured emergency personnel and vehicles from across the county; a huge America flag draped over Main Street from fire ladder trucks, music, Scouts, ringing of a fire truck bell, Taps and “Amazing Grace” on the bagpipes.
David Childress, pastor and member of the County Line Volunteer Department, said that Jesus taught us how to serve others.
“There was a loss of hope for a few moments. It caused us to wonder what would happen next,” Childress said. “Our nation began to pray. Broadcasters on often liberal news shows would ask our country to pray. Our nation had a revival of prayer.
“We realized our hope was not lost. Our hope had been built on circumstances. Our hope was hurt, but not lost. Our hope must be based on who Jesus Christ is. It is not the day we live in but the saviour we serve.
“We are a resilient nation,” Childress said, “because we are founded in the love of God and in trust in the …