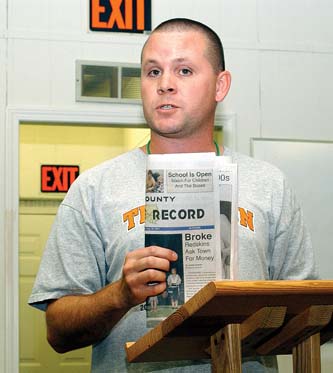 COOLEEMEE – The Cooleemee Redskins will play football this year. The cheerleaders will perform.
The financial books of the booster club that operates the teams are open, and though headed in the right direction, board members are battling past mismanagement of the account that may be criminal.
Supporters of the teams filled town hall here last week – so many that some were asked to leave because of the 49-person capacity. They did so willingly, as long as the town commissioners knew they supported the town offering financial support for the teams.
Soon after the special meeting started, board members unanimously approved to rescind a previous motion donating $6,000 to the booster club.
“Our hearts outweighed our wallets,” said board member, Chuck Taylor. “The money simply does not exist.”
He added that the board plans to make another decision on funds for the team soon. A possibility could be rent the town pays to the ABC Board, which agreed to waive the rent for a year so the town could make the donation. The town’s fund balance, or savings account, is already low, Taylor said.
Almost all speakers had a common theme – do what needs to be done so the cheerleaders and players can continue to participate.
Heath Little, president of the Davie County Youth Football Association, said there is no doubt that the Redskins will be a part of the league. He praised the community’s support for the team, saying it was the most he had ever seen. A similar situation with finances happened in Mocksville a few years ago. “Never did we have that kind of support.”
Booster club representative, Hope Jefferson, said the books are now open and criminal background checks were done on …