Experience There For Davie Volleyball 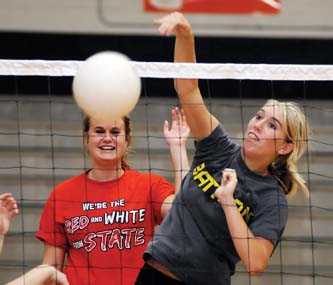 There’s no doubt in Davie volleyball coach Becky Miller’s mind that Mt. Tabor will be loaded again. Reagan is typically strong, and this year should be no different.
“Tabor lost their two big hitters, but I did hear at their tryouts they had like 60 kids come out,” Miller said as she begins her seventh year as Davie’s head coach. “Because they can go wherever they want in (Forsyth County), the volleyball players either go to Tabor or Reagan. With that much of a pool of kids to choose from, I’m sure Tabor is going to be just like they always are, and so will Reagan. Both will be high-caliber.
“But we’re going to see what we can give them.”
Davie indeed faces tough odds in cracking the top two in the Central Piedmont Conference. The War Eagles have lost 13 straight to Tabor, they’re 0-4 against Reagan and they’ve lost 13 of 17 to West Forsyth. By contrast, Davie has dominated North Davidson and Reynolds.
A third-place finish in this league would be cause for celebration. Last year Davie went 16-12 overall and 4-6 in the CPC, finishing fourth and losing in the first round of the 4-A playoffs.
Miller has several reasons for optimism. There are five returners with experience in the …