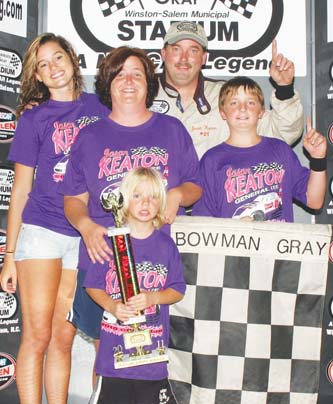 Jason Keaton kept banging on the door, finishing second three times. He finally knocked the door down on July 16 at Bowman Gray Stadium, winning Race A in the Stadium Stock division.
Keaton’s runner-up on July 9 was his third such finish in seven races. But there was never a doubt about how this one would end. Keaton drew the second starting spot and maintained a healthy margin between himself and second-place Chuck Wall.
“I had a good guy behind me,” Keaton said. “I ran (Wall) clean earlier this year, and he just returned the favor. He was letting me make my own restarts. We had three or four cautions, and I had a good restart every time. I was timing the restarts right, taking off and getting about a three-car-length lead on him. I was hitting my marks in the corners.”
Keaton’s youngest child, 10-year-old son Grayson, drew the second …