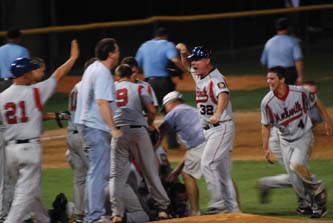 It was a comeback from baseball heaven: Down 6-2 in the bottom of the ninth of an elimination game in the playoffs. One strike from defeat on multiple occasions. Then a 7-6 victory that was riveting, exhausting and altogether unforgettable.
As any fan who was at Rich Park on July 12 will tell you, the rally past Eastern Randolph is one of the great baseball games any of them have ever been privileged to witness.
The hero was Zach Long, who knocked in the tying and winning runs with a two-out, two-strike hit to the left-field corner in the ninth. Delirious teammates pummeled Long as a dogpile celebration – College World Series-style – ensued between the mound and shortstop. The dogpile included Zach’s father, Del Long, who rushed the field in flip-flops and jumped on the pile.
“That was one for the books,” Mocksville coach Charles Kurfees said. “That’s one of the best ever. I haven’t seen that in I don’t know how long. Who would have thought this at the beginning of the year?”
“It’s stuff like that that makes memories you’ll never forget,” assistant coach Todd Bumgarner said. “Unbelievable. I’m still shaking.”
“You couldn’t ask for …