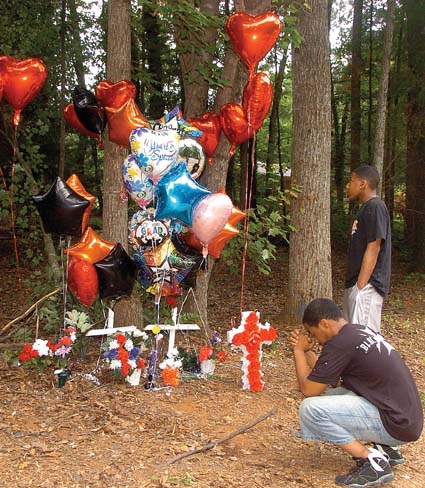 Two Davie teens died last week after the vehicle they were passengers in wrecked and now the driver is facing charges of manslaughter.
According to N.C. Highway Patrol First Sgt. Barry Hower, on June 16 around 5:48 p.m. Nathan Peter Schambach, 19, of Mocksville was driving his 1992 Pontiac west on Country Lane. Hower said the designated speed for the area is 45 and Schambach’s vehicle was traveling at an estimated 75 mph.
James Michael Lewis Jr., 17, and Kenyatta Meleek Brand, 18, both of Mocksville were passengers in Schambach’s car.
Hower said that Schambach ran off the right side of the road around a sharp curve, then overcorrected and drove into the opposite lane where his vehicle’s right side was struck by a 2001 Toyota driven by Dean Henry Frank of Mocksville.
Schambach’s vehicle then skidded and hit a tree.
Lewis and Brand were killed.
Schambach and Frank were taken to Davie County Hospital where they were treated and released.
Schambach has been charged with two felony counts of involuntary manslaughter and is scheduled to appear in Davie District Court on June 30 …

MORE THAN A DEGREE: West Point Graduate Thankful For Opportunities Ahead

By Mike Barnhardt Enterprise Record Jessica Huggins is considering a career with the FBI, maybe the CIA. She may go... read more