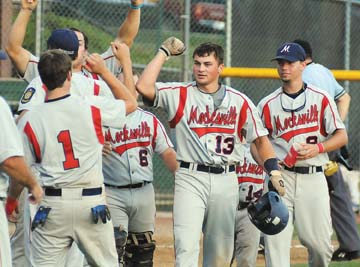 Mocksville coach Charles Kurfees has seen just about everything in 30 years of following American Legion baseball, but nothing like this.
After Joe Watson smacked a double in the first inning of a July 1 home game against Statesville, the Statesville coach accused Watson of using an illegal bat. The umpire ruled that it was indeed illegal and called Watson out. Then five of Mocksville’s 14 bats were thrown out of the game. A livid Kurfees put the game under protest, insisting that Watson’s bat was legal. Making matters worse, Statesville had a 2-0 lead.
Don’t get a sleeping dog riled. Mocksville scored two or three runs for five straight innings, and Statesville went down like a sand castle at high tide, 14-5.
The win kept Mocksville (11-4) a half-game behind Rowan County (12-4) in the Southern Division race. Statesville sank to 5-13.
With the score 2-0 in the first, Tyler Jordan walked. Then Watson hit the double with the controversial bat.
“The coach comes out and says we have an illegal bat,” Kurfees said …