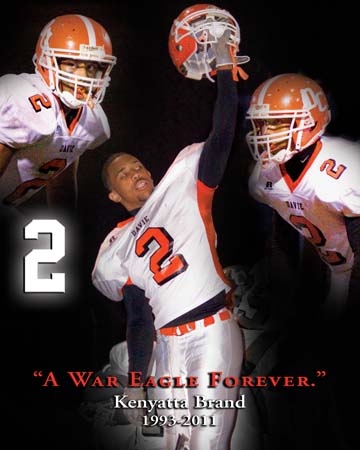 For the second time in less than three months, Davie High is experiencing devastation and sorrow. Mike Lewis, 17, and Kenyatta Brand, 18, were passengers in a car that crashed and killed them on June 16, just five days after Brand enjoyed high-school graduation ceremonies.
The tragedy comes on the heels of teacher/coach Daric Beiter’s unexpected death on April 1.
Brand was a football player on the 2010 Davie team that pulled off the greatest playoff run in history and finished as 4A state runner-up.
“On the last day of exams, I saw him and we slapped hands,” assistant coach Devore Holman said. “I said: ‘Well, you made it, didn’t you.’ He said: ‘Yep, sure did.’ I said: ‘Man, I’m proud of you.’ We gave each other a hug. He had that big grin. He will truly be missed – not only as an athlete but as a person.”
Brand symbolized what was so endearing about that 2010 team. Davie really was a true team, and Brand was the consummate role player.
Brand exuded class and humility all four years of his career. As a 2009 junior, he was a backup at outside linebacker and a scout-team running back, working, listening and waiting for his opportunity …