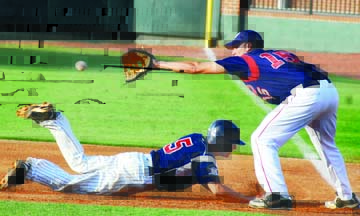 The Mocksville Legion baseball team’s home game against the Mooresville Legends on June 24 was about as exciting as a Matlock marathon on WGN.
And that’s just the way coach Charles Kurfees wanted it. Mocksville brought out the big bats and handed the Legends a 17-2 trouncing in seven innings.
While the Legends dropped to 3-6 in the Southern Division, Mocksville rose to 8-2 for the first time in 17 years. The year was 1994, when the coach was Dale Ijames. Mocksville stayed ahead of the 8-3 Mooresville 66 club.
“When you get up there at the top, you’re not going to see everybody’s best pitching,” Kurfees said.
It was a flat-out rout from the first pitch. Jacob Barber (3 for 4), Alex Newman (2-4), Tyler Jordan (2-5), Connor Bodenhamer (2-5), Zach Long (2-4) and Tyler King (2-4) led the offensive parade as Mocksville collected 18 hits.
Four hits soared out of the park. Barber launched two homers, this three-run shot staking pitcher D.J. Webb to a 4-0 lead in the first. Long led off the third with his third homer. “That one got out in .3 seconds,” assistant coach Todd Bumgarner reported. Watson smacked a solo shot, his fourth, in the fourth. And Barber left the yard again in the sixth.
“He’s in a groove, and hopefully he can stay in it,” Kurfees said of Barber.
“The first (home run) was top of the trees,” Bumgarner added …