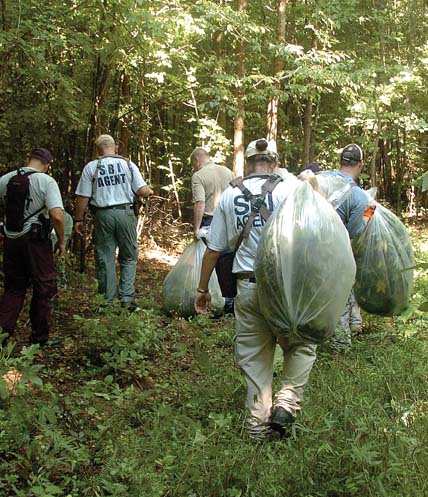 A large marijuana grow discovered by authorities in the southern part of the county was given an estimated street value of more than $2 million and investigators are still looking for those responsible.
Hartman said that reports of marijuana being grown in the Point Road area have been received for some time, but officers had never found the plants. “It’s a pretty spread out area.”
Two months ago, they received the report that marijuana was being grown at a secluded wooded area off Point Road and set up surveillance of the area, according to Hartman. “We worked the surveillance on it for approximately two months and it doesn’t appear anyone has ever returned to it,” Hartman said. “The area is accessible only by foot.”
On June 29, officers began the task of removing the 1,680 marijuana plants, watering devices, and growing materials on the two acres.
Hartman said there was potting soil, five-gallon water buckets, drainage cups, and a bucket containing over one pound of unplanted marijuana seeds removed …