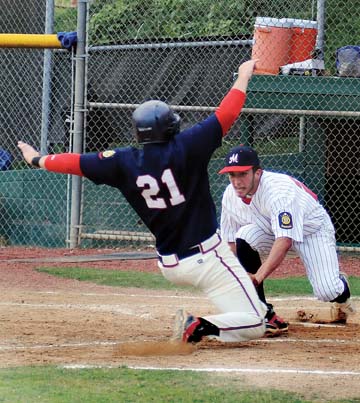 No matter the situation, the Mocksville Legion baseball team can do no wrong in the Southern Division.
Mocksville and pitcher D.J. Webb seemingly toyed with visiting Mooresville in a 7-6 comeback win on June 6. After the top of the fourth, Mooresville had three home runs and  a 5-1 lead.
Then Mocksville proceeded to yank the win from Mooresville’s grasp, with Webb blanking the Moors over the final four innings and Mocksville scoring six of the game’s last seven runs.
Mocksville’s fifth straight win raised its records to 5-4 overall and 4-0 in the division. Thanks to Zach Long’s tiebreaking home run in the eighth, it is 4-0 for the first time since 2005. Mooresville slipped to 4-3, 2-2.
Mooresville flexed its muscles in the early innings. It hit a two-run homer in the first. A solo homer in the third made it 3-0. And a solo homer in the fifth tied the game at 6.
Webb shook off the tumultuous start and did a splendid job from the sixth on.
“We’re just going out and competing every night,” coach Charles Kurfees said. “That’s what it’s about. I knew D.J. was going to be OK. He wasn’t going to get himself in a lot of trouble.”
Webb allowed four earned runs and no walks in his second straight complete-game win. He improved to 2-0 and might have set a Guinness World Record for strikes-to-balls ratio …