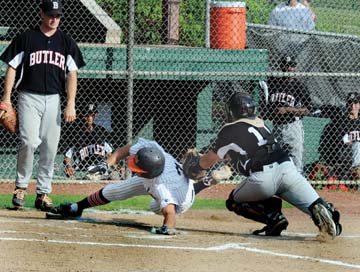 Somebody forgot to tell Butler that Davie’s baseball team was 22-2, ranked No. 6 in 4-A and had won 16 straight.
Davie’s dominating season ended in a shocking manner on May 16, losing 1-0 to visiting Butler in the first round of the state playoffs as the largest crowd since 2006 witnessed nerve-wracking tension.
The game started on May 13 but was suspended with two outs in the top of the third by rain and lightning. The game was completed on May 16. Butler, which tied for third in the Southwestern Conference with an 8-6 mark, improved to 16-9.
The loss was like a root canal times five for the War Eagles, who soared to 20-plus wins for just the fourth time in school history. They wanted to not only make a deep run, but they wanted to become a state champion for the first time since joining the NCHSAA in 1978. Instead of advancing to a second-round game against league rival North Davidson, they left the park in disbelief.
“No matter what I said, the kids knew we had an unbelievable season,” Davie coach Mike Herndon said …