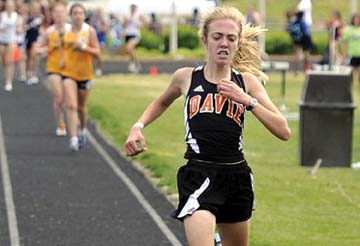 The ultimate lure of sports lies in the simple fact that you just never know. This isn’t like going to a concert or movie. This stuff is completely and utterly unscripted.
Anna McBride of the Davie girls track & field team provided a defining moment in Davie High history Saturday at N.C. A&T, winning the state 4-A championship in the 3200. Whatever is above star, that’s what McBride is now. For not only did she win the state championship, she broke the all-classifications state record with a time of 10:46.08. The old record was 10:46.22 set in 2002.
Yes, two miles in 10:46.08! And she’s a sophomore. Think about that.
McBride became the first Davie track & field member to win the state since 2001, when senior Samantha Murillo captured the 400.
When it was over, tears were the only foe McBride could not fight off.
“I was going to be perfectly fine if I got top five,” McBride said. “My goal was top five and go under 11 again. On my last 100 (meters), I was coming around and couldn’t hear them behind me. I was like: ‘I’m so close. I can do this. I could be the state champion. I could be the state champion.’ As soon as I passed the (finish) line, I collapsed at one of the timer’s feet. I was shellshocked for a good 10 minutes.”
McBride’s feat created a frenzy. Adding to the drama was the fact she was running with a heavy heart …