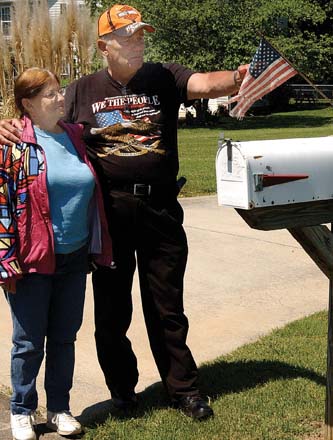 ADVANCE – Like most people Elwin Muntz remembers where he was on Sept. 11, 2001.
“I was right here,” the 67-year-old says as he points to the couch in his living room. And like millions of people across the country, Muntz put up an American flag after the tragedy.
“It’s a cheap little flag,” he says, “because I didn’t think it would take but a few days to catch him.”
Muntz, of course, is referring to Osama bin Laden, the master-mind behind the 911 attacks.
“I thought it would be two maybe three days before they got him,” Muntz recalls. “But a year passed. I was discouraged that he hadn’t been found. I wondered how something like this could happen.”
One year turned into another and another.
Muntz said he brought the original flag inside that he’d placed on his mailbox, and eventually he put it in his garage.
He even thought about taking it to the American Legion where it could be properly disposed of …

By Jackie Seabolt Enterprise Record Melinda Beauchamp has made Davie County her home for the last 23 years. She lives... read more