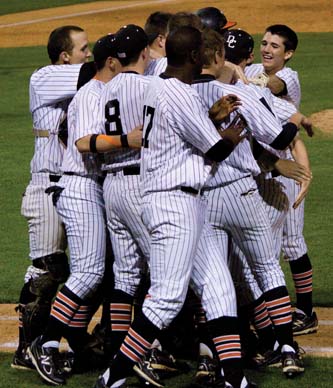 Mission accomplished, part one.
Davie’s varsity baseball team nailed down the Central Piedmont Conference’s regular-season championship with a game to spare last week. A 12-1 rout of Reagan, coupled with Reynolds’ 3-2, 12-inning upset of North Davidson, sealed the deal. This was a day the War Eagles had been building toward since 2007, when a four-year title drought began.
But to clinch with a game left made a memorable surge all the better. Behind Davie’s 9-1 CPC mark was West Forsyth’s 7-3 and North Davidson’s 6-4.
“We’ve never done that,” coach Mike Herndon said after Davie sealed its first title since ‘06. “Even when we’ve been fortunate to win it, we’ve had to fight tooth and nail all the way through. You never think you’re going to go into the last CPC game and it doesn’t mean anything to us in the standings.”
The War Eagles picked up three wins last week to go to 20-2 overall. Talk about dominance. Davie is outhitting opponents 209-59 and outscoring them 215-101.
There are stars everywhere you look. Four players have 29-plus hits, including Alex Newman (33), Corey Randall (30), Carson Herndon (29) and Connor Bodenhamer (29). The RBIs are just as close, with Herndon and …

By Brian Pitts Davie Enterprise Record The Davie varsity baseball team is having a season we’ve never seen before. The... read more