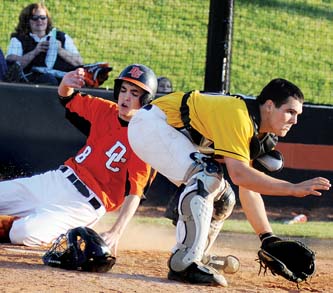 This time, Alex Newman had to leave the dramatics to Connor Bodenhamer.
Bodenhamer’s single in the bottom of the ninth inning gave Davie’s varsity baseball team a 2-1 win over Reynolds in the semifinals of the Central Piedmont Conference Tournament.
The next day, the War Eagles made more memories by exploding late on West Forsyth and pulling away 7-1 to capture the tournament title.
In the final game of the regular season at BB&T Field in Winston-Salem, Davie stole a 2-1 decision from Reynolds in the bottom of the seventh on Nick Boswell’s game-tying hit and Newman’s walk-off hit.
With top-seeded Davie and No. 5 Reynolds tied at 1 in the bottom of the ninth in the CPC Tournament, which was held at North Davidson, Boswell’s bunt moved Javan Phillips to second. With first base open, Reynolds decided to intentionally walk Newman.
“I think they probably did what they had to do – set up a force and hope for a double play,” Davie coach Mike Herndon said. “Last game Newman won it, and he really hit a lot of balls on the nose. So they didn’t want to give him an opportunity to beat them again.”
Bodenhamer hit a ground ball up the middle to bring in Phillips and end Reynolds’ season at 13-13. The …