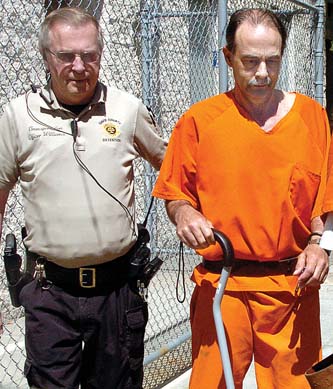 Murder suspect David Earl Hughes was in court again last week, with his attorney Ashley Cannon.
Cannon was seeking to have Hughes declared indigent so he could have a court-appointed attorney and was also asking Judge Carlton Terry to sign a safekeeping order, which would have allowed Hughes to be held at a state hospital because of health issues.
Hughes is accused of killing and dismembering the body of his live-in girlfriend, Patricia Swaim.
Cannon is retained and wants to continue to be involved in Hughes’ case, but told Terry that Hughes is poor and needs a court-appointed attorney. She also said based on her own observations and research, she doubted Hughes was “competent to be sworn” in an affidavit of indigence.
“He’s still being evaluated by a doctor as to his competency,” Cannon said, adding she was not making a motion to have him declared incompetent to proceed.
Assistant DA Karen Biernacki said if there was some question about Hughes’ competency, that needed “to be addressed post haste.”
The affidavit was handed to …