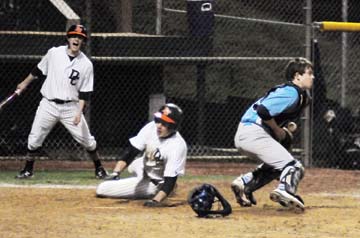 West Forsyth at Davie on Friday at Rich Park had all the traits of a rivalry game: focussed players, two strong and experienced pitchers and the largest crowd of the year making for a dynamic atmosphere.
But the War Eagles turned the anticipated classic into a classic rout. They dealt West a total thrashing, 15-1 in four and a half innings.
The win lifted the War Eagles to 6-1 overall and 2-0 in the Central Piedmont Conference. The numbers are gaudy – .345 bating average, 3.8 stolen bases per game, six homers and a 2.80 ERA.
West fell to 5-2, 1-1.
Everyone expected a tight, tense game with Davie’s Ryan Foster facing West’s Ryan Mayhew, who is headed to UNC Wilmington. But Mayhew didn’t get out of the second inning. West’s six-game winning streak against Davie – the Titans won 6-5, 5-1 and 8-1 last year – went up in flames, and Foster was holding the match. The junior righthander put together a performance as good as you’ll find anywhere.
He gave up two hits in five innings – the game was halted via the mercy rule – and added three hits in three at-bats, a double, home run, walk and five RBIs as Davie won over West for the …