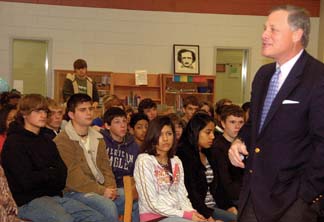 U.S. Sen. Richard Burr had the attention of a room full of teenagers at Davie High when he quoted the inaugural address of George Bush Sr., from 1989.
“‘My friends, we are not the sum of our possessions. They are not the measure of our lives. In our hearts we know what matters. We cannot hope only to leave our children a bigger car, a bigger bank account. We must hope to give them a sense of what it means to be a loyal friend, a loving parent, a citizen who leaves his home, his neighborhood and town better than he found it.’”
Burr, a Republican senator from North Carolina, grew up in Winston-Salem, graduated from Wake Forest University (where he played football), and has served in the Senate since 2005. He spent over an hour at Davie on a rainy Thursday, sharing his insight into the economy, the current presidency, and what he believes should be the guide of Congress as they make decisions about such key issues as healthcare.
“The Congress of the United States is out of control. They need …