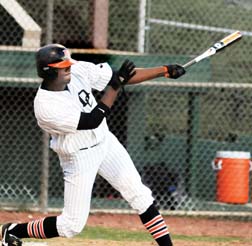 A Davie varsity baseball team that is thinking big in 2011 gave a glimpse of everything it could be in the first week of the season. The War Eagles earned check marks in three big boxes – pitching, hitting and defense – while beating Mooresville 13-3 in six innings and Mt. Pleasant 3-2.
Both nonconference games were held at Rich Park.
The numbers through two games were sparkling. Davie hit .377. Pitchers Ryan Foster, Joe Watson and Will Beeson combined for a 2.69 ERA. Davie outhit Mooresville and Mt. Pleasant 20-11.
“I told our guys: ‘We can’t be nice,’” 13th-year Davie coach Mike Herndon said after the mercy-rule drubbing of Mooresville. “That’s our biggest thing, putting teams away when we get the opportunity. And we did that tonight. I know we won 13-3, but we’re not 10 runs better than they are. They’re legit. They swing it.”
Mooresville, coming off an impressive 3-0 season-opening win over Alexander Central, watched Davie rap out 14 hits. Alex Newman went 3 for 4 with a walk in the leadoff spot. Connor Bodenhamer went 3 for 4 with two doubles in the six hole. Bodenhamer batting sixth speaks volumes about Davie’s lineup. Nick Boswell and Javan Phillips both went 2 for 2 with two RBIs – and that’s from the nine spot. Not bad for a pair of second basemen who were playing varsity for the first time.
“Those two will be competing,” Herndon said. “We may move Boswell to third a little bit (when Foster is pitching). We’ll just have to see what works …