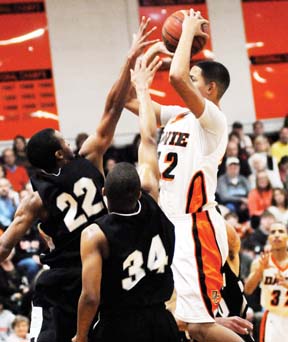 Davie’s varsity boys basketball team ran into a buzzsaw and laid a rotten egg in a 77-58 home loss to unbeaten Reagan.
But the War Eagles didn’t let the bad taste linger. They washed it down with a 76-64 win at North Davidson that really meant something historically, emotionally and physiologically.
The win in the final regular-season game moved Davie to 18-4 overall and 7-3 in the Central Piedmont Conference, good for a tie for second with Mt. Tabor. It’s safe to say the War Eagles lived up to preseason hype. They stand at 18 wins for just the fourth time in school history, joining 1969, 1988 and 2000. Davie entered the CPC in 1984-85, and it notched seven league victories for just the third time, joining 1988 and 1995. And it finished second in the CPC for just the third time, joining 1988 and 2005.
Reagan finished 10-0 in the league. Davie lost a coin toss to Tabor, making Tabor the two seed for the CPC Tournament and Davie the three. Davie played No. 6 North Davidson in the first round Tuesday. The semifinals are Thursday and the finals Friday, all held at Tabor. If Davie beat North for the third time, it will face Tabor Thursday evening, with the winner earning the No. 2 seed – and a home game – in the playoffs.
“A tie for second was short of what our goal was, but it was still a great …