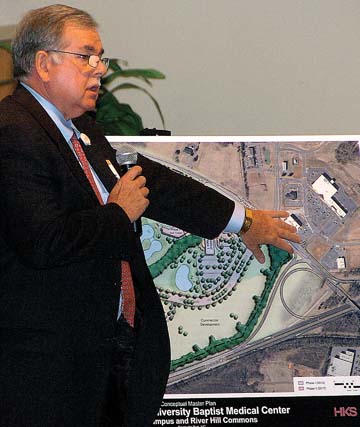 The doctors are coming to a neighborhood near you.
Wake Forest Baptist Medical Center announced last week that it will begin construction on a medical complex on NC 801 at I-40 in Bermuda Run. Doctors offices, an emergency department and an out-patient surgery center should be completed by the end of 2013. The $60 million project will include 175-250 jobs.
And in 2017, 25 hospital beds will be added to the site, taken from the current Davie County Hospital in Mocksville. That could be expanded if there is a need.
Donny Lambeth, president of the hospital, said that as services open in Bermuda Run, they will be closed at the Mocksville hospital. The beds will remain open in Mocksville until after 2017.
The news Friday drew a large crowd to the announcement at Hillsdale United Methodist Church.
“This is an exciting day for Davie County … and an exciting day for the medical center,” said Steve Robertson, Davie resident and chair of the hospital’s board …