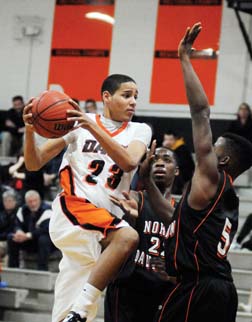 For most of 26 years in the Central Piedmont Conference, the Davie varsity boys basketball team has been dreadful. Not anymore. A team once synonymous with ineptitude is now in position to finish in the top two.
Coach Mike Absher appears to have everybody pulling on the same side of the rope at the right time. Last week the War Eagles dismantled visiting North Davidson 83-52 and host West Forsyth 83-64. The latter wasn’t as close as the score suggests.
Reagan entered the week 5-0 in the CPC, but it has to face Davie again. Mt. Tabor was 5-1, but it had to face Davie once more. Davie was 4-2, one more win than it had in the CPC the past two years combined. Reynolds was 1-4, while West Forsyth and North Davidson were tied at 1-5.
At 15-3 overall, Davie already has the most wins in six years.
“The great thing is we’re playing our best right now going into February. That’s really awesome,” coach Mike Absher said. “If you map it out, that’s where you’d like to be. If you go back to the Reagan game, the last four games we’ve played really, really well, and we’re fortunate to have won three out of those four.”
There’s plenty of praise to go around …