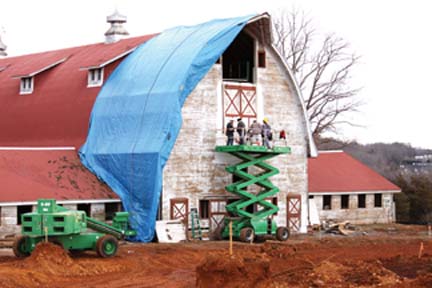 Portions of Farmington have been named to the U.S. National Register of Historic Places, as has WinMock at Kinderton, site of the new special events center for Sterling Events Group.
The property, an iconic 17,000-plus square foot barn, was built in the late 1920s and survives from the country estate built by S. Clay Williams, a former president of RJ Reynolds Tobacco Co.
The barn, officially listed as Win-Mock Farm Dairy, was added to the register on Dec. 27 in recognition of its importance to the history of North Carolina and the United States.
During its prime, Win-Mock Farm Dairy was one of the largest dairies in North Carolina with one of the biggest and best herds of Red Poll cattle in the country. The barn’s unique architectural style features a cavernous 7,200 square foot loft designed to hold over 7,000 bales of hay.
“We are so pleased to have WinMock receive the recognition it so duly deserves, said Wayne Thomas, president of Sterling Events Group. “We consider ourselves stewards of this magnificent barn and look forward to unveiling the beautifully renovated property this summer …