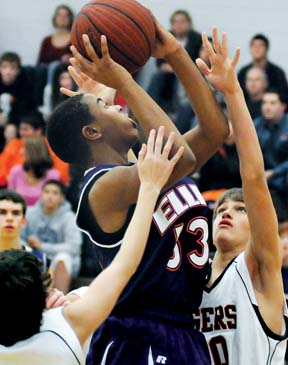 What a weird, wacky, unpredictable and entertaining game this was (entertaining for Ellis, that is).
The Ellis boys basketball team turned heads last week at South Davie. The Jaguars turned recent frustration into fuel and emphatically ended a four-game losing streak to South, winning 62-43 to snap South’s five-game winning streak.
South was the bully in the first quarter and early part of the second. Cedric Wilson drained three 3-pointers in the first quarter, Caleb Dyer knocked down a triple and South had a 15-6 lead.
The South lead was 23-8 during the second quarter. This was when Ellis began to send shockwaves through the South gym. The Jaguars closed the half on a 12-0 run and scored 20 of the game’s 22 points in the third. They went from trailing 23-8 to leading 45-25. For those counting at home, that’s a 37-2 run. No kidding.
The South nightmare was caused by Cade Carney (18 points), Jordan Earle (14), Holden Poole (12) and Ben Miller (nine). Miller hit three of his team’s eight 3-pointers …