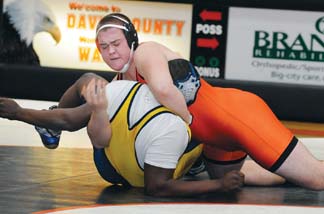 Davie’s wrestling team exited the land of unbeatens last weekend at Orange.
Coach Buddy Lowery’s 96th loss in 35 years was a tough one as Orange scored the final 15 points to beat Davie 31-27.
Earlier in the week, the War Eagles ran their Central Piedmont Conference winning streak to 18 with a 69-6 snoozer over visiting Mt. Tabor.
Davie got pins from Alex Costner, Michael Waters, Logan Cartner, Gerald Whitaker, Tony Donati, Trevon Faulkner, Matt Cusack, Toby Lowe and Cole Blankenship.
Shane Carter rolled 7-0. Trevor Albarron and Ryan Smith received forfeits as Davie improved to 11-0 overall and 2-0 in the CPC.
It was as if the War Eagles were racing to see who could pin the quickest. Costner took care of his opponent in 12 seconds. Waters did it in 33 seconds, Whitaker in 39, Donati in 19 and Faulkner in 44.
“We said let’s go take care of business,” coach Buddy Lowery said. “They wanted to shut them out.”
Davie’s first loss since the 2010 Western Regional final against Parkland came in the first of four matches at Saturday’s Orange Duals.
It wasn’t a bad loss. Orange is ranked third in Class 3-A, and it’s been extremely competitive for many years. Last year Davie had to work for a 35-30 win.
After watching his team fall behind …