Do Something Good – Helping Those Less Fortunate Honors MLK 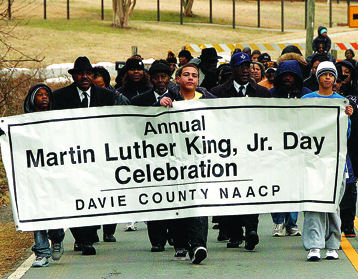 Do something good for someone less fortunate than yourself.
Dr. Martin Luther King Jr. not only believed in that philosophy – he lived it.
And speakers at the Davie NAACP celebration of his birthday on Monday said we should all continue to follow that way of life.
“We are mindful that there is still a lot of dissent in this country, but Martin Luther King believed in the basic decency of the American people,” said the Rev. Andrew Brown, president of the Davie NAACP, prior to a march from Downtown Mocksville to New Jerusalem Apostolic Church on Campbell Road. “We believe in Kings’ dream, his preaching and teaching. Go out and do some good.”
If he hadn’t been killed in 1968, King would be 82 now, and according to Brown, probably still helping his fellow man.
“God placed him there, in Montgomery, Alabama,” Brown said, “a man of his intellect, his temperament. By his stepping up to the …