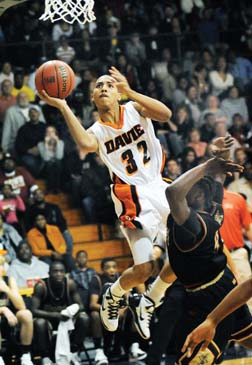 SALISBURY – The atmosphere was charged. Goodman Gymnasium holds 2,650 people, and every space was filled for what promised to be an exciting boys final between Davie and Salisbury in last week’s Sam Moir Christmas Classic at Catawba College.
Salisbury met the challenge and played like dynamite. Davie, on the other hand, couldn’t have played much worse. The War Eagles trailed all the way, shot 35 percent and lost 77-62.
Salisbury put the brakes on Davie’s best start in 11 years. The top-seeded War Eagles lost for the first time in 12 games. They were holding teams to 50 points a game, and the only time they allowed more than 77 was in their only close game heading into the Moir final, an 83-78 overtime win over West Rowan. On top of that, Davie put up its fewest points in eight games.
Never mind Salisbury’s seed (three) and record (6-3). This was a mild upset, if that. The Hornets reached the third round of the playoffs last year. They started this season slowly because seven of 13 players were in football and winning the 2AA title on Dec. 11. Now they have four straight Moir titles, an unprecedented feat for a boys team in …